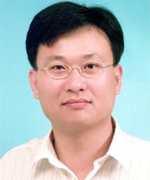 He was with ITRI/ERSO in 1999 involved in the development of CMOS RF ICs for cellular and wireless LAN applications. From 1999-2002, he was an assistant Professor with the Department of Electrical Engineering, National Central University, Chung-Li, Taiwan. Since 2002, he joined the Department of Electronics Engineering, National Chiao-Tung University, where he is now a full Professor. He was the secretary of mixed-signal design (MSD) consortium sponsored by Ministry of Education from 2002-2005, coordinating international short courses and lectures development for the improvement of domestic university education. From 2006-2008, he served as the deputy director of Industrial Technology R&D Master Program of electrical and computer engineering college at National Chiao Tung university. He is currently the deputy executive director of National SoC Program in Taiwan, whose mission is to coordinate efforts from private and public sectors to create new IC industries and build Taiwan into a global SoC design and service center. He also serves as IEEE Solid-State Circuit Society Taipei Chapter chairman starting from 2008.